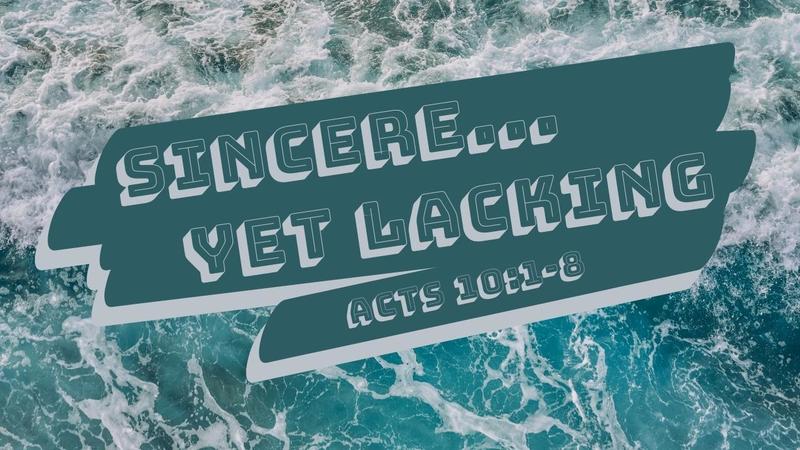 Individuals who are live lives above reproach.

Individuals who are good neighbors.

Those who care for the poor and needy.

Those who go about doing good.

They believe in God.

Yet, something is missing in their lives.

That something being JESUS!

I believe in God

I do good things

I live a God-fearing life

I care for others

I pray every day

I believe when I die, I will go to heaven

At Caesarea there was a man named Cornelius, a centurion in what was known as the Italian Regiment. 2 He and all his family were devout and God-fearing; he gave generously to those in need and prayed to God regularly. 3 One day at about three in the afternoon he had a vision. He distinctly saw an angel of God, who came to him and said, "Cornelius!"

4 Cornelius stared at him in fear. "What is it, Lord?" he asked.

The angel answered, "Your prayers and gifts to the poor have come up as a memorial offering before God.

A man of power

He and his family were devout and God-fearing

Gave generously to those in need

Now send men to Joppa to bring back a man named Simon who is called Peter. 6 He is staying with Simon the tanner, whose house is by the sea." Acts 10:5-6

Now we are all here in the presence of God to listen to everything the Lord has commanded you to tell us."

34 Then Peter began to speak: "I now realize how true it is that God does not show favoritism 35 but accepts men from every nation who fear him and do what is right. 36 You know the message God sent to the people of Israel, telling the good news of peace through Jesus Christ, who is Lord of all. 37 You know what has happened throughout Judea, beginning in Galilee after the baptism that John preached— 38 how God anointed Jesus of Nazareth with the Holy Spirit and power, and how he went around doing good and healing all who were under the power of the devil, because God was with him.

39 "We are witnesses of everything he did in the country of the Jews and in Jerusalem. They killed him by hanging him on a tree, 40 but God raised him from the dead on the third day and caused him to be seen.   41 He was not seen by all the people, but by witnesses whom God had already chosen — by us who ate and drank with him after he rose from the dead. 42 He commanded us to preach to the people and to testify that he is the one whom God appointed as judge of the living and the dead. 43 All the prophets testify about him that everyone who believes in him receives forgiveness of sins through his name."

·         To TESTIFY ABOUT HIM THAT EVERYONE WHO BELIEVES IN HIM RECEIVES FORGIVENESS OF SINS THROUGH HIS NAME.

Jesus didn’t come into our world simply to make us better people.

He came into this world to set us free from the bondage of sin.

Every person in this world needs Jesus

He is still the only Way back to the Father

He is still the only name whereby we must be saved

God welcomed Cornelius into His family.

Peter and the Jews who came with him saw that salvation was also for the Gentiles and not just the Jews.

It was Jesus who made the difference.

It was Cornelius’ faith in Jesus that made him a child of God.

His sins were now forgiven and his name was written down in the lamb’s book of life.

There still is only one way to the Father’s house

One door for the sheep to go through

One name whereby we must be saved!